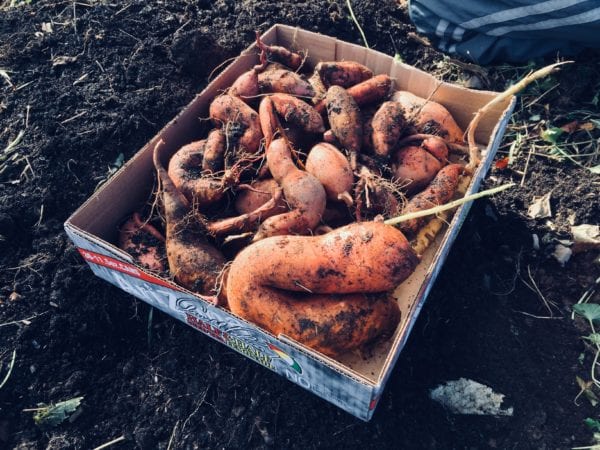 Hunting for sweet potatoes on a sunny Sunday.

Sweet Potatoes are one of Amy’s favorites. The kids like them too, especially with a little cinnamon. Our summer crop yielded a handful of the red-orange beauties. Most of them were found peeking above the heavy clay soil (we mixed in a heavy dose of compost this year but our ground is still very thick).

The first round of sweet potatoes have been chilling in a net bag with our potatoes. Their cool, dark hiding place seemed like as good a shot as any, of us saving them until our Homegrown Thanksgiving Challenge could be realized. Still, we planted a second effort and have been waiting months to check out what’s been going on. 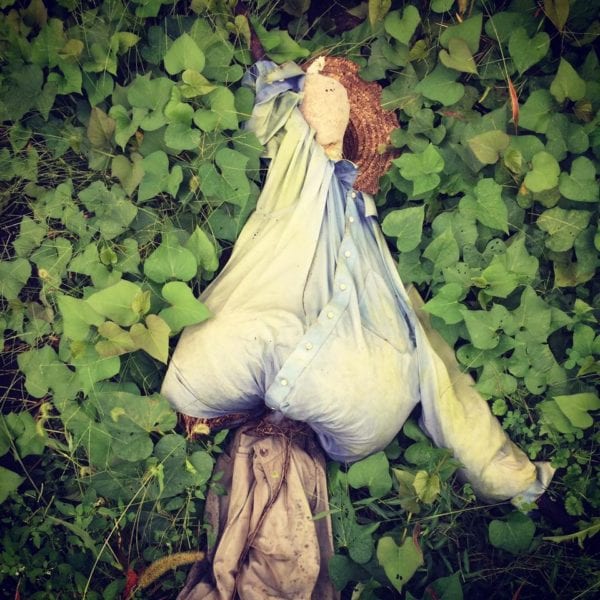 Our sad scarecrow didn’t make it through the summer, the sweet potatoes swarmed him once he fell.

The vines sprawled through the garden, overtaking our scarecrow and encroaching upon the carrots. We had not seen any orange peeking up from the soil so we weren’t sure what was in store or whether we would get anything from this second effort.

It’s been a frigid fall on the homestead.

The past few days have been frigid on the homestead. It seems like fall may have lasted a week and the temperatures are already 20 degrees below normal. We’ve started to get concerned that winter’s fast arrival is putting us behind on chores and preparations that could cost us greatly this winter. Checking out the sweet potatoes has not been a priority… it’s hard to want to dig in the dirt when you know you’re fingers are going to get chilled in the frosty dirt.

Sunday, started off frigid like the last few days. But shortly after noon the sun came out and two of the boys and I, headed out to get caught up on chores. As the mercury rose into the high 40’s, they took a walk to the now (mostly) dead looking sweet potato vines. They looked pathetic and not very inspirational. Still, I found a sweet potato hiding just below the surface… then a second… and a third. It looked as though the three red-orange, average-sized, roots was all we would be blessed with. We were in for a surprise.

Leave it to Lee.

Leave it to Lee, our youngest (a sweet super-sized boy… seriously the kid is built like a farm boy), to push aside some soil and strike paydirt. Raising a sweet potato into the air he asked, “Daddy is this one?” It sure was and there were more from where that came. 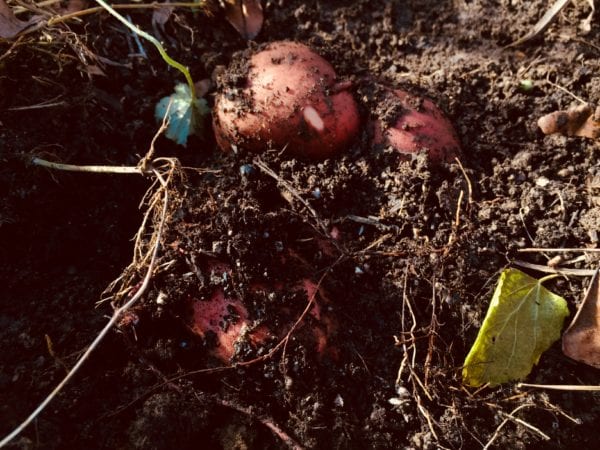 A clump of sweet potatoes sticking from the cold Kentucky soil.

As Lee and Mack gently dug through were the vines once covered the ground they found a few dozen sweet potatoes. The largest sweet potato weighed in at more than 1lb.!

Our total haul from this second crop of sweet potatoes weighed 6 lbs 12.8 oz. Not bad for our second effort in our first year. We’ll have more than enough for Thanksgiving and have learned some valuable lessons about planting them. Learning By Living never tasted so sweet… potato. 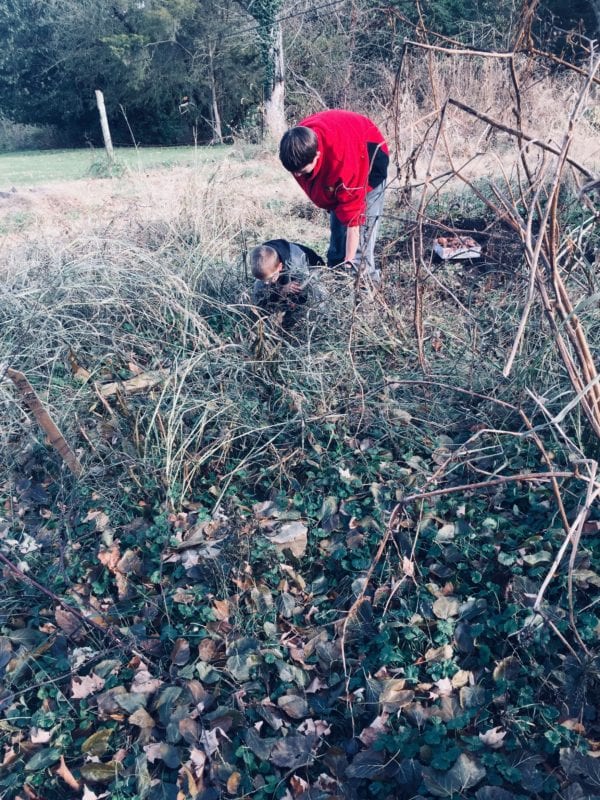 Mack and Lee hunt for sweet potatoes in the garden.