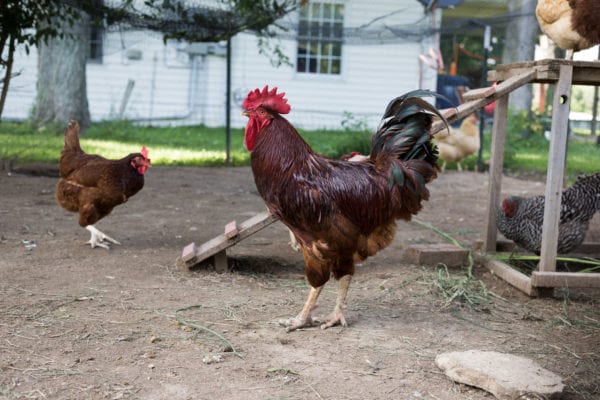 Order in the Coop

Last October we hatched our first chicks in the coop, “Thursday” and “Friday”. It was extraordinary to watch our little chickens grow-up. We discovered at about 4 months of age that our distinctive young chickens were roosters. We knew we would not be able to keep them, especially since we still had their father, “Roostavo,” whom we adored. Since roosters will fight each other until death to fight for the lead of the flock, we needed to make a decision.

Roostavo is a very large, stoic, Rhode-Island Red rooster. His bronze feathers glow in the sunshine and his deep teal feathers accent his bright  red comb and waddle. Roostavo has always taken good care of his flock and is fairly well-mannered around people. It was hard to have to take him from his flock when he had signs of frostbite. He had to be kept isolated awhile after he healed because we thought he might possibly have mites. Once the weather warmed up, “Roostavo” was put into an outdoor fenced in space with his own little cabin coop. He would stand in the corner closest to the main chicken yard and stare loyally.  Every once in awhile he would let out the saddest, loneliest chicken cry you could ever imagine. A low mourning kind of sound. We knew “Roostavo” longed to be back with his flock. It had been months since he had had contact with any other chicken.

We were able to find a home for “Friday,” but “Thursday hung out for awhile with us until his father “Roostavo” recovered.  “Thursday,” while striking with his blend of colors, was not well-mannered with the females of his flock. The flock as a whole, seemed to be at unease and a bit chaotic. Maybe this young rooster just lacked maturity- or maybe it was this roo’s personality. Every rooster is different.

…and calm is restored.

It was apparent that we needed to restore “Roostavo,” who was twice the size of “Thursday”, his son. Roostavo also has a cool, calm about him. The day Roostavo was restored, his large stepping walk said everything. He was back home and the hens around him took to him. They seemed to be relieved. Usually there is a rather big shake-up in the chicken yard when new chickens enter. Since it had been months since Roostavo had walked among a chickens, we were watchful. There were only two instances when a hen started picking on another hen. Roostavo flew right down between them and broke them up. There is indeed order in the coop again. I don’t think there will ever be another Roostavo…. but then again, we have a broody hen who is sitting on eggs with his return. The 21st day is near, so only time will tell.