It started when our son tripped on something sticking from the ground.

We’d lived on the farm for about a year when, one warm spring day, our oldest son came running into the house. He said he’d tripped on something metal sticking from the ground near the pond.

Chris went to check on the mystery object and could not tell what it was. It appeared to be circular, about 5 feet across and made of steel. A lip about ½ inch stuck from the ground but it was unclear how deep the object was buried.

It pays to have good neighbors.

We called on Bob, our wonderful neighbor who lived on the property about 40 years ago. Bob and his wife had raised their own family here. He has been a wonderful source of information and help, we’re really lucky to have him living so close.

Bob had no idea what we were describing over the phone so he came to check. After a few short minutes, Bob thought he had figured out what was buried but had no idea why it was there, how long it had been there or where it came from.

A few days later, Bob brought his big tractor over. He and Chris dug near the mystery object and attached a chain. Bob then slowly pulled the tractor forward revealing the buried treasure… an old rusty wagon wheel.

It was a really exciting moment. Buried treasure! 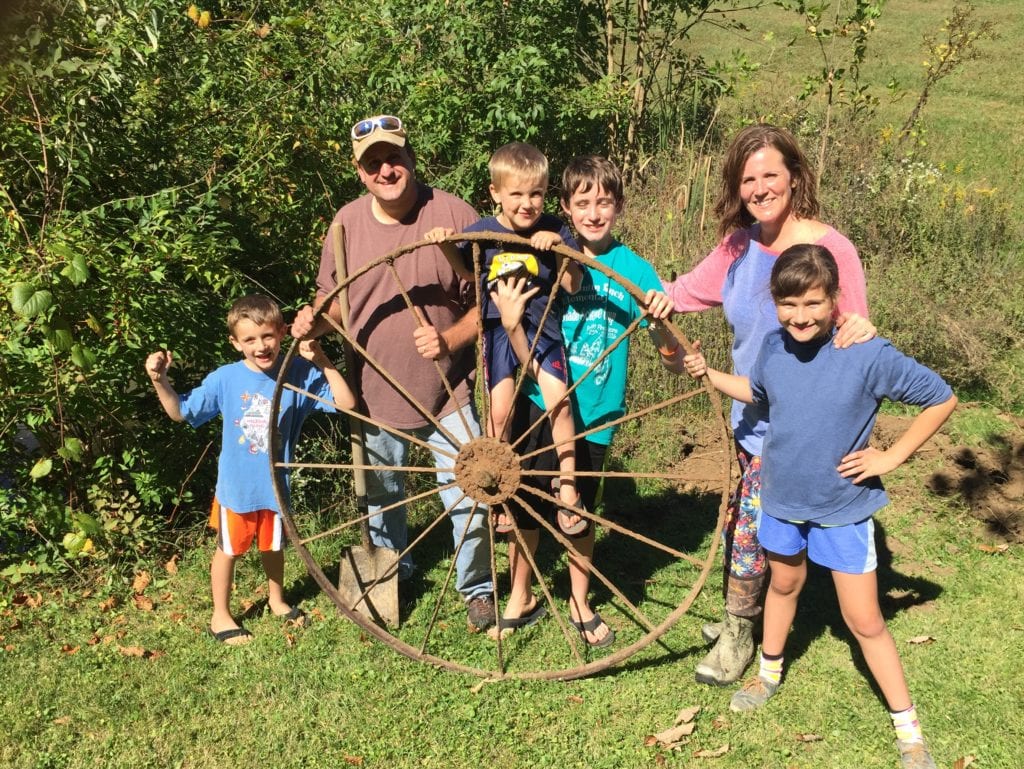 Here we are with our fantastic find! The buried treasure that had stayed hidden below the surface for 80 to 100 years.

Clearing off the years of soil and sod revealed a gear on the back of the wheel. It appears the old metal wheel was part of a haying operation and must have broken from the wagon’s axle.

After all these years the wheel was back in the warm Kentucky sunlight even if its origins are clouded in mystery.

We may never know the story behind the wheel but we’re definitely keeping our eyes peeled, wondering if there’s more buried treasure on the farm.

Posted in Farm Life
← Shouldn’t we all want to “be a chicken”?Warm Kitchen, Cozy Family Dinner →