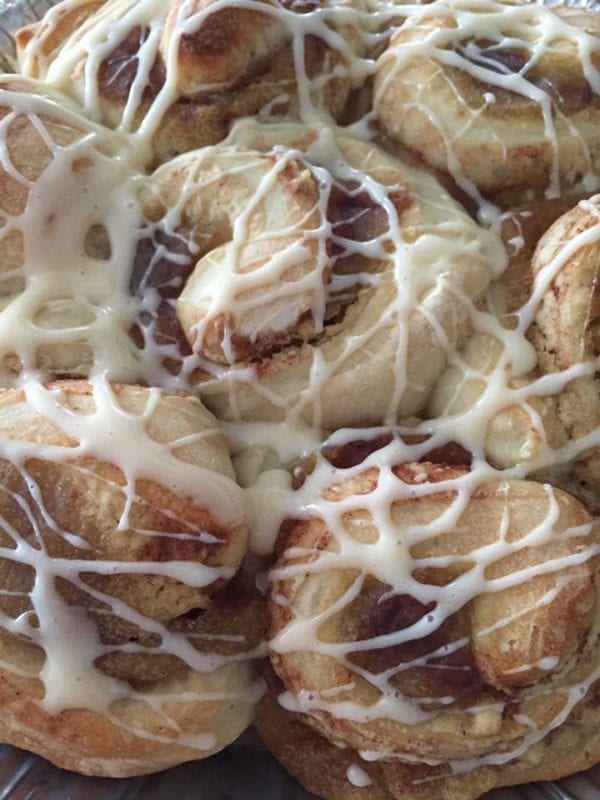 Here is a little spin on your classic cinnamon rolls.

These cinnamon rolls truly ring of the holiday spirit. They have such a warm and inviting aroma. There are a few cinnamon roll recipes out there that are pretty good. All of the recipes are basically the same. For years, I would hand-knead the dough and place it in a warm place to rise. Every once in a while, I will opt for this method, as it has by far the best homemade taste and texture. We also own a bread machine, which is what I’ve been using for the last few years- mostly because it is easier with our busy family. The machine does the work of kneading and providing the warmth for rising. The texture isn’t quite the same as doing it all by hand, but maybe that’s because all hard work usually tastes better. Regardless, no one complains over homemade cinnamon rolls, warm from the oven.

If you’ve made a batch of chestnut jam, I recommend an 8 oz. jar to use as the filling. Just spread it on a large rectangle of rolled dough, slice, then let it rise in a greased pan as your recipe suggests. Bake.

Eggnog icing will put your cinnamon rolls over the top.

As for the icing, we tried a simple eggnog version that is perfect to drizzle over the rolls after baking. Use about a cup of powdered sugar. Whisk in enough eggnog so that the icing is a consistency to be spooned or drizzled over the rolls. You can adjust the consistency by adding more powdered sugar to thicken, or more eggnog to thin. It doesn’t take much.