When Chickens Expire, What Do You Do?

Our neighbor wanted to retire from chickens and gave us our starting flock. He gave us a few black Australorps, a couple Buff Orpingtons, & a few Rhode Island Reds. Within that flock was a favorite hen, her name, Stevie, a stand-out Rhode Island Red. She had moves that none of the other chickens had. She seemed to groove to music that no one else could hear, earning the nickname, “Stevie Wonder.” 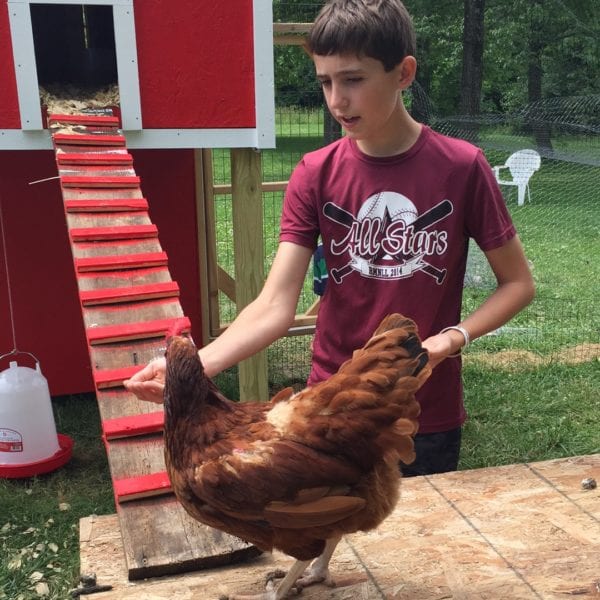 Our “Stevie” hen had a neurological disorder, but it didn’t keep her from eating or drinking. She seemed to be a happy hen. Our rooster, Roostavo, took her under his wing, so to speak. He would stay close to her without pecking or taking advantage of her close proximity. The other hens never bothered her.

During our frigid winter, we wondered how Stevie would fare. As the days got colder and slower, so did Stevie’s head motion. When the other chickens would find it too cold to stay in the yard and head back up the ladder into the coop- Stevie didn’t have the energy to try. There were many evenings that our oldest boy would go out, pick her up, and carry her to the coop, where she could rest in pine shavings.

She toughed it out all winter long.

A couple of days ago, we observed she was extra slow when responding to her environment. If she was knocked down by another chicken, it took her a couple of minutes to rise. Last night, she was the last hen remaining outside. She was picked up and placed just inside the coop, where she laid until this morning. Stevie was so weak, she couldn’t move out of the exit door. Her eyes half closed.  Amy knew Stevie wouldn’t be making it down again.

When the kids were at school, Amy checked on Stevie to find she had made it to the opposite side of the coop, her face had been pecked on by the other hens, sensing her weakness. Within an hour, Stevie’s unique rhythm had gone still. She was a “lovely” and “wonderful” hen. She survived to the first day of Spring and brought us happiness. Stevie is the first casualty of our original flock. We called the neighbor who gave us Stevie to break the news. He was saddened by her passing and amazed she had lived as long as she did.

What exactly do you do with a chicken that is no longer alive and died of natural causes?

You should always check with your city or county laws first regarding animal disposal, whether that be burying, cremation, or other disposal. We were advised to place the deceased chicken in several grocery bags, then seal in a large garbage bag ready for disposal. It’s important that the feathers can not escape as disease can be carried on them. Proper disposal is important as not to spread disease to any other animal or human by improper disposal.

Posted in Animal Adventures, Chickens
← Our Orchard, A Memorial to A Great ManWhen Life Gives You Ice, You Fish →