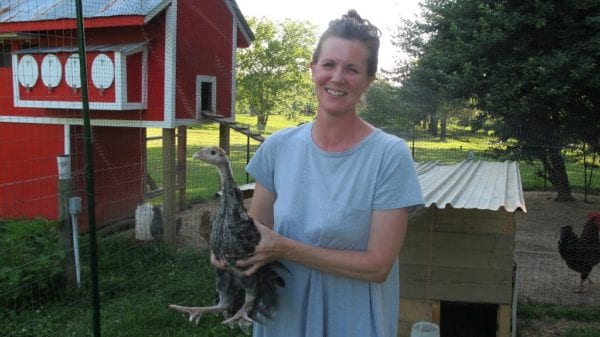 Amy holding one of our young Bronze turkeys.

After weeks of waiting and preparing, our turkey’s have finally arrived at the homestead. The pair of Bronze turkeys are just less than 8 weeks old and getting along just fine. Chris built a temporary house for the birds out of reclaimed materials. The project took only a few days and our rooster, “Roostavo”, lived in it for about a month as we housed him away from the flock to make sure we could reintroduce him safely. We placed the turkey house in a run that’s about 25 feet long by ten feet wide. The fenced sides are ten feet tall and netting covers the top of the run. It’s made to be removed relatively easily if we decide to take it down after harvesting the birds (although it’s a great secondary run in case we need to separate birds for some reason). 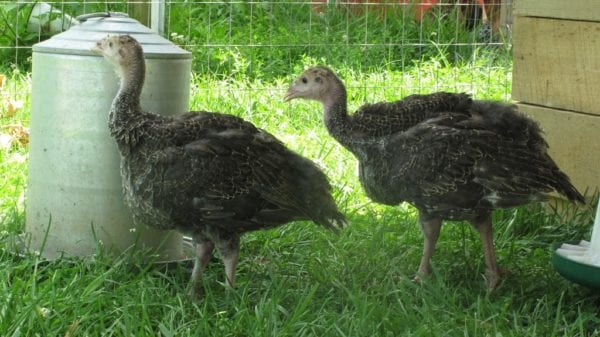 Are we ready for the test?

This will be a tremendous test for us. We butchered our first chicken the week that the turkeys arrived. The experience went better than we had expected, in some ways, and was more difficult in other ways. Our friends, who had been caring for the birds along with several other turkeys they purchased at the same time, laughed as they delivered the turkeys. As we all began to huddle around the new arrivals, one of the kids mentioned names for the pair. Our friend laughed out loud and reminded the kids, “don’t get too attached”. Our friend’s son then added that the kids should name one “Thanksgiving” and the other “Christmas”.

We chuckled, but inside we knew that this was the aspect that will likely be a real test of our homestead hearts.

The turkeys seem somewhat interested in their feed but prefer foraging for food.