Not a single predator… until now.

A predator is going to come hunting for dinner when you have a farm, it’s just a fact of nature. We’ve taken every precaution to protect our chickens and have been very fortunate… until now. When Chris designed the chicken coop and chicken run, he designed the fence to protect underground from any predator who digs. He built a door on sliders that can be closed to keep the chickens safe inside the coop at night. He even designed and built a net, painstakingly zip-tying it together to custom fit the run, in an effort to keep the chickens in and the birds of prey out. Until now, our chicken coop has been a fortress.

Guess “who” came over unannounced.

Sometime during the night, a curious Great Horned Owl found a weakness in the defense. The young predator cashed in on a bad habit we’ve been getting in to. For the past several weeks we’ve not closed the sliding door on the chicken coop. We were just tired of chasing the same four chickens back into the coop at night. 3 Barred Rock hens and 1 Silver Laced Wyandotte hen preferred to sleep under the stars. Scooping them back up each and every night just got old and, considering that it has been so hot outside, we figured that letting them relax outside was not really hurting anything. 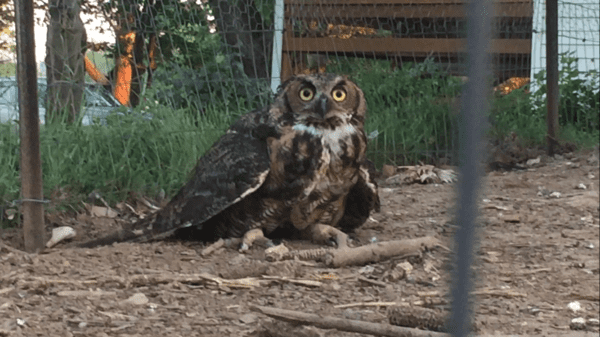 It appears that this curious, young owl somehow swooped through an opening in the net. We still can’t figure out exactly where although there’s a chance that it did not see the net, swooped down for the chicken and hit the net just right making its way through a seam. Our oldest son woke early to go to cross country track practice and noticed the turkeys with their feathers splayed as though they were defending themselves from a predator. The turkeys were in the next run over but pretty frightened by the young owl who was, at this point, trying to find a way back out of the chicken run.

Operation: Protect the Chickens and the Predator.

We secured the chicken coop, left the run gate open and then took positions trying to urge the predator to safely exit. It was clear that the big bird was pretty frightened and, while it had attacked and killed one of our chickens, we wanted to make sure the owl remained safe and unharmed. It was just out doing what comes naturally and, having feasted on a partial chicken dinner after dark, was anxious to race the sunrise and get back to the safety of its nest.

As we slowly urged the owl to the gate, it took off like a shot headed straight to an area protected only by chicken wire. With a smash the bird hit the fence, knocking it loose and creating a hole big enough for escape. It flew away without hesitation and no signs of injury, leaving behind ¾ of a dead Silver Laced Wyandotte.

Another “learning by living” moment.

We’ve already begun surveying the coop and run and making sure our fortress is as secure as possible. It wasn’t the wake up we expected and it could have been much worse, but we’re “learning by living” and this was definitely another lesson in homestead life.