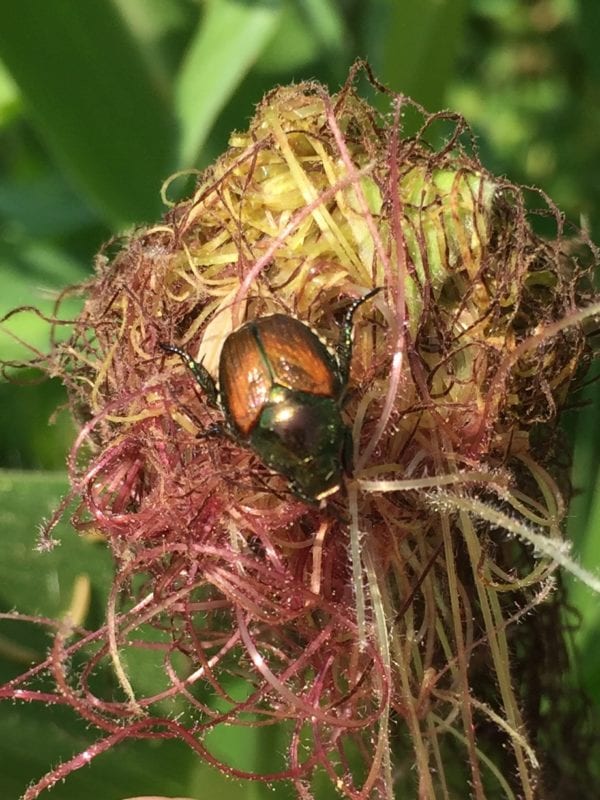 The Japanese beetle is not a welcome guest in the garden.

It’s a beauty of a beetle but bad news for plants.

Shiny, metallic colored insects hanging out on orchard leaves and vegetable plants. They are beautiful, but when they consume what we are trying to grow and leave behind skeleton leaves, they become a menace. It seems that this beetle, known as a Japanese beetle, are noticed as one here or there, then the population grows very quickly. They devour plants and have no problem with being selfish. It doesn’t take long for a booming population of these beetles. What can be done to control them?

Our unfriendly introduction to the Japanese beetle.

The first year our beloved orchard was planted, the Japanese beetles found that they loved the trees too. They started making their appearance around the end of June. We would shake them off, only to find them returning. These beetles snag a food source, find a mate, and start laying eggs in the ground about 10 days later. After a couple of weeks, the larvae begin feeding on the roots of plants. So not only do you have damage above the ground, the cycle is  beginning underground too, according to the University of Maine Cooperative Extension, “Pest Management Specialist.” 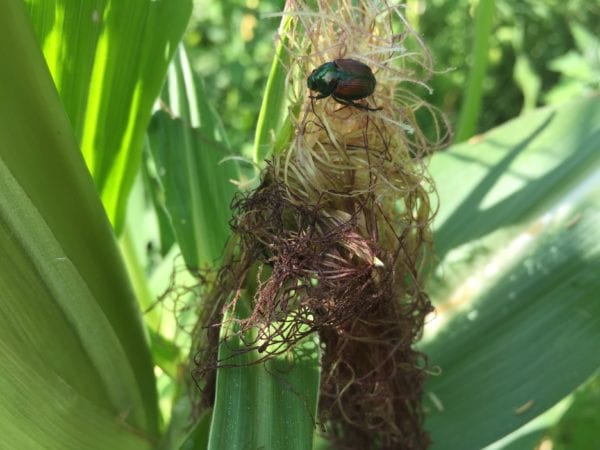 A Japanese beetle sits atop an ear of corn.

Options, options, really… we just need something to kill these things.

There are a variety of options to try. We wanted to start by trying natural methods of pest control. We were pointed towards Neem Oil, which has an insecticidal soap in it. It is supposed to repel the beetles and cause death to them. It did seem to lessen the beetle population, however, we still found the iridescent beetles clinging to some leaves, days after application.

We know of folks who will fill a cup with water and put a squirt of dish soap in it, then walk through their plants, flinging the beetles into the cup, where they drown. We have tried this, however, we don’t necessarily make eye contact with each and every affected plant every day. Consistency is probably key.

We wanted to do this without pesticides.

There are plenty of pesticides out there that control populations of unwanted insects. We have tried pesticides in the past, but have found them to not be completely effective- and they can kill off some of the important bugs needed to keep plants and trees healthy. Ladybugs and bees are keepers. They promote great happenings in fruit trees and gardens- we don’t want to damage their populations.

Ever hear of Milky spore?

What do you do? A good friend of ours recently shared how they found a natural, organic, safe way to completely control their out-of-control Japanese beetle problem… and the kicker is that it is long lasting. In fact, this control  works at the ground level on the larvae and it spreads year after year, creating more coverage. Milky spore is a microscopic bacteria that kills the larvae. The bacteria is able to live through winter, increasing it’s effectiveness year after year. Milky spore can last 10 years or more!  This may be a best kept secret- but we certainly can’t keep it a secret if it can be of help to you. We ordered ours online and have recently applied it around our orchard, garden, and pumpkins. We were very pleased with the amount of space it covered and if it works, it will be a fairly inexpensive fix. We will keep you posted. If you have ideas on how to control pests, we’d love to hear from you.