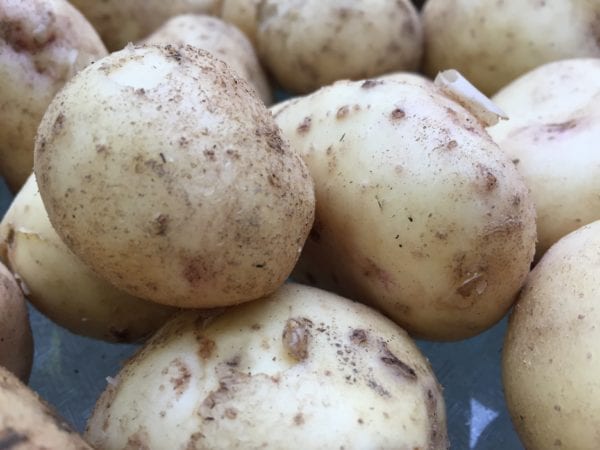 Some of the fantastic potatoes we brought in during our first harvest.

They say potatoes are easy to grow, they’re right.

They say that potatoes are about as easy a crop to grow as anything you might try to plant. If our first harvest is any proof, they’re right. We hauled in a total of nearly 10 lbs. In our first effort! It was an exciting experience to comb through the soils searching for our hidden treasures. 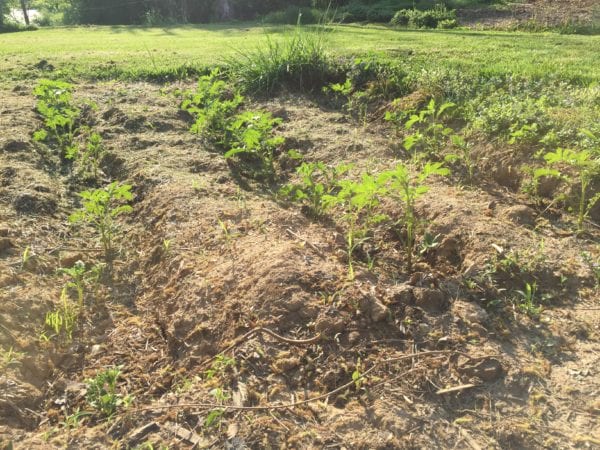 Rows of potatoes starting to grow, ready for mounding.

In early spring, before the weather turned very warm, we dug 8 foot long rows, three feet apart. Each row was dug about 6 to 8 inches deep and approximately 4 to 6 inches wide. We bought our starter potatoes at a local farm shop and prepared them as the package required. Each starter was separated so that there was at least one eye and the piece was at least one inch square. After cutting the starter potatoes down to size, we let them sit for a couple of days so the cut areas developed a bit of a hardened skin. After preparing our potato trenches, we were really excited to get growing. Waiting those couple of days for the starter potatoes to be ready was tough. 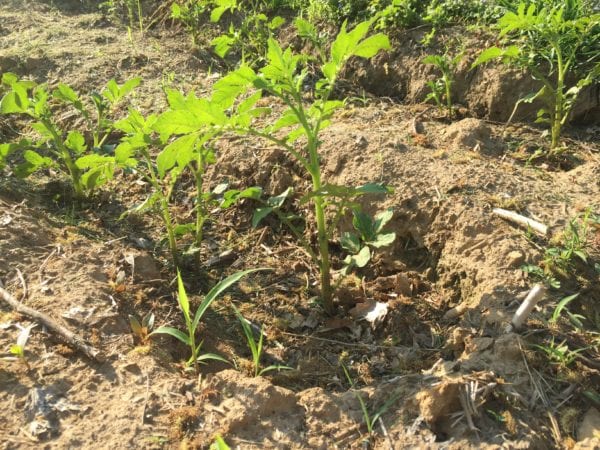 It took about three weeks for the potatoes to grow big enough for mounding.

When it came to “mounding”, we turned to compost.

Potatoes like loose soil in which to grow. As they grow, you have to mound them. We don’t have an excess of loose, not grass covered ground, to choose from- and our soil has a lot of clay in it. We had already decided to have some compost hauled in and decided that it would be what we turned to for “mounding” the potatoes. After our harvest I’ve questioned whether that was the best way. We’ll investigate more to see if that was indeed smart, not smart or had no affect.

Eyes to the sky.

Placing the potatoes in the trenches, 1 foot apart, we made sure that the eyes were pointed to the sky. Then we covered the starter potatoes with about 4 inches of compost and watered. It took about 2 weeks for us to really see something pop from the ground but when the green sprouts sprung from 23 of our 24 starter potatoes, we jumped for joy. 23 for 24 was not a bad ratio. We remember watching a fantastic Canadian reality show called “Prairie Quest”. If you haven’t looked for it on a streaming service, you must! It was created about the same time as “Survivor” but instead of going to an exotic island, two couples are chosen to try to live for an entire year on the prairie in Canada living with only the technology, tools and clothes from the 1800’s. We really got into watching this show and binge watched it over a couple of weeks. In that show, the couples planted what looked like hundreds of potatoes in trenches. Unfortunately for them they were planting in what would turn out to be the rainiest spring on the prairie in recorded history and their starter potatoes floated to the surface of their flooded trenches. Shortly after planting our potatoes, it began to rain here… hard! We worried but the rain did not destroy our trenches.

About three weeks into the starter potatoes being in the ground, the green sprouts were 8 inches or more above the ground! That is, we were told, the time to get “mounding”. We hauled over some of our compost and gently mounded each plant, so that each mound covered about half of what was exposed.

Mounding, Chris quickly learned, would become a twice a week ritual. Yes- the potatoes grew that much, that quickly. As we continued to pile on the compost, the plants continued to sprout higher and higher. When we got to mounds that were about 2 feet tall we decided to quit mounding. The compost wasn’t contained- and started rolling off the sides. 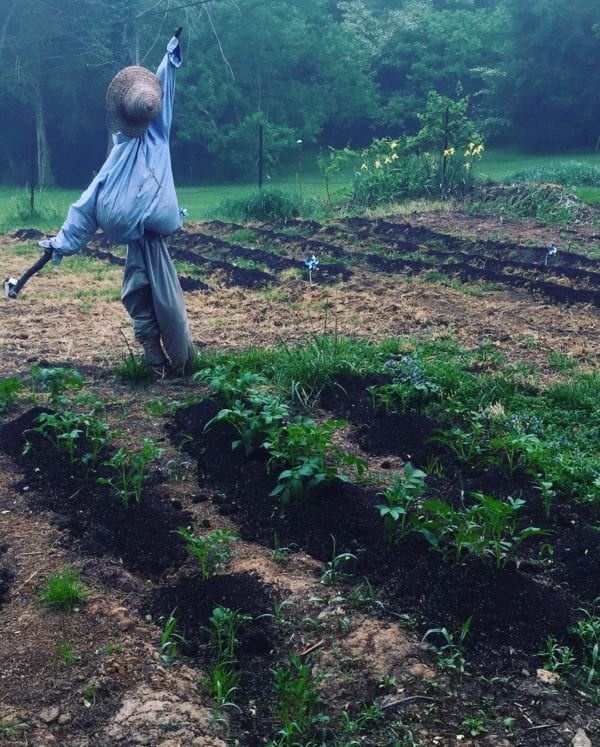 Our scarecrow stands watch over the garden, at his feet are three rows of potatoes.

We dusted away uninvited guests.

We dealt with bugs midway through the season. Tiny flea looking mites arrived and were starting to devour the leaves. We found that they were most likely flea beetles and a natural solution was talc. Dusting talc across the leaves seemed to do the trick (we also used neem oil). It took two treatments but eventually they were gone and the plants recovered nicely.

Watching the plants grow larger and larger through the summer was exciting. Not knowing what was going on under the surface, however, created an exciting and nerve-wracking mystery. Were we going to end up with a bountiful crop, or be spudless come Thanksgiving? Remember, this crop was going to be very important for our Homegrown Thanksgiving Challenge. No potatoes meant no big plate of roasted potatoes at our dinner table.

All of the potatoes flowered within a week or two of each other. One plant shriveled away at this time and appeared to have died. We didn’t know whether that was normal and a sign to harvest or a sign of something much more dire.

We kept the faith and just waited and waited. We heard that we should let the plants grow for 90 days before harvesting them. “They’ll tell you when it’s time to pick”, was the phrase we heard over and over again. The plants were no longer growing, and really starting to wilt. At 93 days in, Chris grabbed a fork and dug into the mounds.

Eureka! There’s gold in them there mounds!

The first fork or two of soil turned up nothing and our hearts began to sink. Then, just like a cue from the literary “rule of threes”, Chris took another swipe with the fork and a golden treasure appeared. It was our first potato! The first gift from our harvest was just smaller than a baseball, a great size. The color and skin looked fantastic and the thrill of uncovering this find really put a pep in our step as we continued to search. 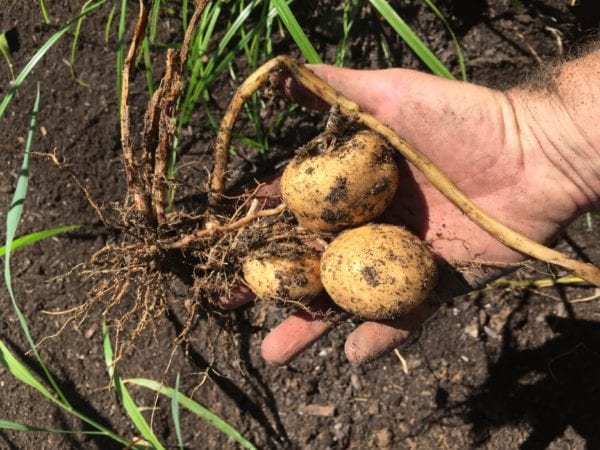 Holding some of our first potatoes still connected to the plant.

In all, we harvested just less than 10 lbs. of potatoes (9 lbs, 14.8oz to be exact!) We were told that you needed to let them sit for a few days in the shade and cool temperatures so the skins could harden. Unfortunately it’s been blazing hot with temperatures in the mid 90’s and heat index of 100+. Sitting them outside is not an option. We washed the potatoes, put them in net sacks, and have them drying in a darkened room in the house. We originally intended to hang them in sacks from the rafters in our crawl space, storing them until needed. But we pulled in less than the harvest that we had hoped for. We’ll inspect the potatoes, use what the pitchfork cut into (maybe home fries or saute them), and are considering canning the rest for use at Thanksgiving. With so few potatoes and big hopes for Thanksgiving, we just want to guarantee we have something at our dinner table in November. Canning seems like a guarantee that the spuds will keep.

We do have 2 more potato plants in the ground, an experiment on a smaller scale. Chris’ mom had some potatoes she hadn’t eaten that had “gone bad”. We threw them in another small trench about 3 weeks after our bigger effort. Those plants took a long time to show any movement but are growing. We’ll check on them in a few weeks. We also are looking at a second planting of potatoes later in the season to see if we can get more to grow before winter. 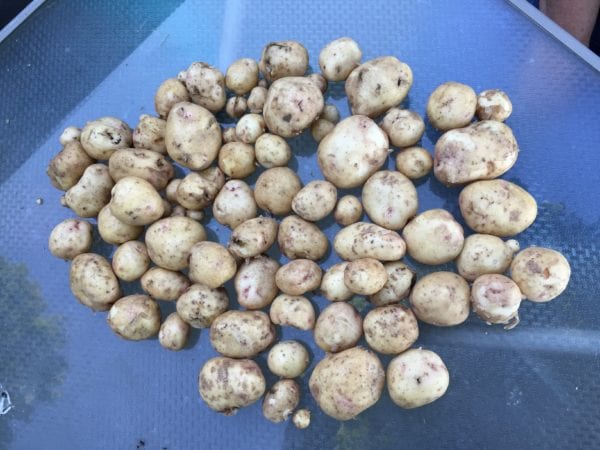 Our entire first harvest of potatoes.