Sometimes “Soon” is “Too Soon”

We’ve heard a lot of advice about when to introduce new chickens to your flock. Until now, we’d had great success. Typically, we’re told, you want the new chickens to be about 3 months old before adding them to your flock. A group of Barred Rock and Silver Laced Wyandottes we raised from chicks took a couple of weeks to really fit in well.

Sneaking Chickens in at night.

For the Barred Rocks and Wyandottes we tried the old trick of sneaking them in under cover of night. As soon as the birds fell asleep in the chicken tractor, we gently lifted them into the coop, closed the door and waited to see what happened after the sun rose. There was a lot of commotion and several of the 6 birds refused to leave the safety of the coop for a few hours. Eventually all 6 wandered outside but stuck close together and away from the rest of the 10 chickens. There was definitely some pecking order activities taking place.

It took a couple of weeks for 6 new members to not be so skittish and take their place. Oddly enough, they don’t like to roost on the roosting bars instead they hunker down together on the coop floor or in nesting boxes. 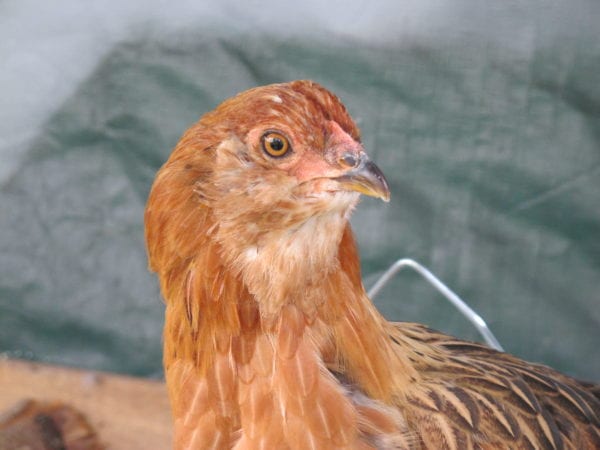 A young Ameraucana chicken curiously looks at the camera

This time was different.

Amy bought 6 Ameraucana chickens. They’ve managed well together in the chicken tractor since they were big enough to get outside. We watched as the growing birds seemed to be about the same size as the Wyandottes and Barred Rocks were when we introduced them into the flock. These Ameraucanas are about 3 months old and seemed to be about the same size as we remembered the other young chickens being. We thought they were ready for the challenge. Again, under cover of darkness, we snuck the 6 birds into the coop when all of the chickens were fast asleep. Daylight revealed the same type of commotion we experienced with the previous new additions. One Ameraucana chicken was more bold than the rest and the others made it pay. After a few hours we noticed that it had begun bleeding from above its beak. Amy took the bird out, provided first aid and put it back in the chicken tractor to protect it. Later in the day, when the small cut did not show blood, she reintroduced the bird. Within a couple of hours the same Ameraucana was trapped in the chicken run fence and had been pecked to the point that its back was raw and bleeding. Chris noticed just in time and he and Mack rescued the young bird, provided first aid, then took all 6 Ameraucanas out of the chicken run to return them to the chicken tractor.

What Could We Have Done Differently?

We probably should have waited another two weeks before introducing the new birds to the flock. We’ll regroup and try again when they seem bigger and more likely to hold their own. A fellow chicken farmer suggested waiting until the chickens begin laying eggs before introducing them to the flock- of course this is only needed if the young birds were not naturally raised by a mother hen. Our Homestead Adventures is truly a Learning By Living experience for us. We hope you take something from our successes and failures and we look forward to hearing from you about the lessons you learn in the process.

An Ameraucana stands alone shortly after being introduced to our flock.