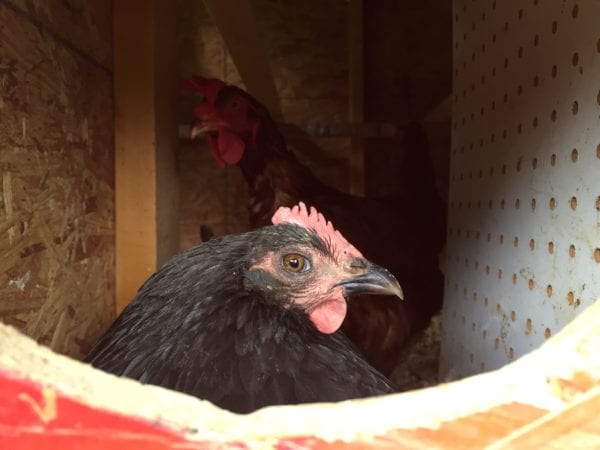 We thought she was ready to hatch some eggs. See the chicken behind her? There’s more to this story.

And now we know why you never count your chickens before they hatch.

For the past few weeks we’ve anxiously awaiting the arrival of chicks. We’ve counted down… and kept counting… and counting. Nothin’. Nada. Zip. It’s been a bit frustrating and worrisome. The Black Australorp hen began sitting on eggs more than a month ago. It normally takes 21 days to hatch an egg but this time her broody behavior has yet to be rewarded.

Early on in the waiting game we counted five eggs under the hen. This was fantastic news. The only time we’ve had chicks hatch naturally there were only 2. It was an amazing experience even with just the 2. This time we were expecting to more than double the fun. But as time wore on we noticed that other hens would sneak into the broody girl’s egg box when she would leave to get a drink or a quick bite to eat. As time stretched on it became clear that others were laying eggs in the egg box creating a switcheroo of sorts. From time-to-time, the Black Australorp was kicking out eggs and we had hoped that it was her way of getting rid of the new eggs. Instead it appears she was kicking out the non-viable eggs and one after the next, after the next, she kept opting for new eggs.

This weekend, as the bird left her nest, we were able to sneak a peek and found that there are now only three eggs in the egg box. All three are blue eggs laid by Ameraucana chickens. We wrote on the eggs with a pencil with the hopes of being able to track the progress, but at this point it is a crap shoot.

We wait some more.

So now all we can do is wait, watch and hope. We have no idea how long the current eggs have been in the egg box and can only hope other birds don’t sneak eggs under our broody girl. And, in the meantime, we have another hen sitting in an egg box. When she left the nest this weekend we realized she was sitting on no eggs. But she is the one who hatched two last fall. Maybe, just maybe, she’ll figure find some eggs too and at some point we’ll be celebrating. For now… we wait.