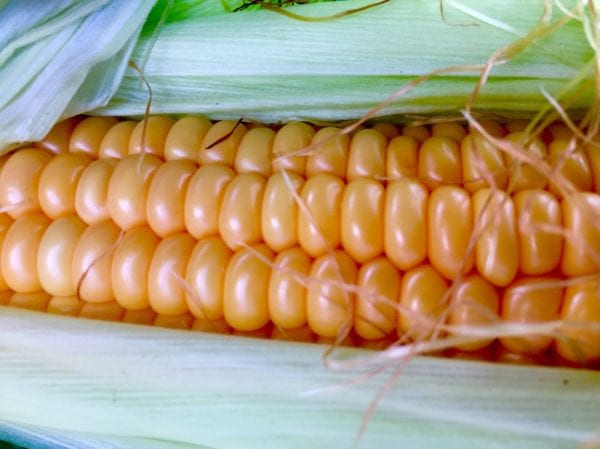 1st corn crop brings less than an ear-full but more than “needed”.

We are celebrating, knowing that we can check off one more item from our Homegrown Thanksgiving Menu! Corn! This success will taste so much sweeter come Thanksgiving when you consider how much adversity we faced with our crop this year.

Second time is the charm.

We’d had zero success last summer, in our first effort to grow corn on our homestead (our first real effort to ever grow corn). That attempt fed the crows… not us. We had a handful of stalks shoot from the hard Kentucky, clay soil. They netted absolutely nothing but a handful of tiny ears that we stared at lovingly but could not enjoy- even as an appetizer. 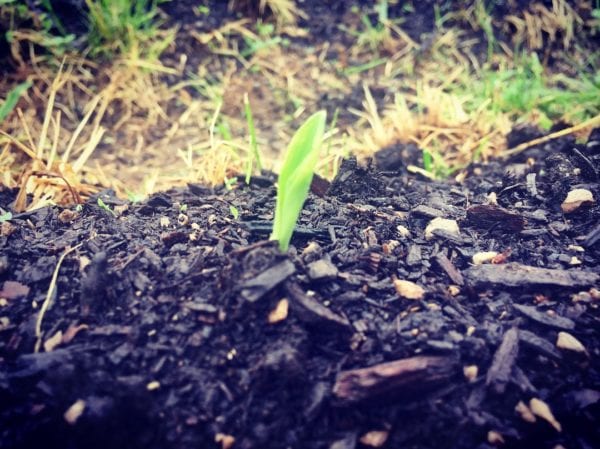 Corn beginning to sprout on day 6.

This time around we changed locations to a much more fertile area of the homestead and we kept our crop near the rest of our garden. We planted 6 rows about 20 feet long after we tilled then hoed the rows by hand. We sowed our seeds, watered, and prayed. The sprouts began to show in 6 days! We looked to the heavens and shouted, “Hallelujah”! Maybe we were on the right track.

Nothing good comes easy, even with corn.

Within a couple of weeks we began to experience adversity in the corn crop. We had added compost to our cornrows hoping that would give our crop an added boost. What we learned was, that was not a smart idea. While our cornstalks took root, they took root in the loose compost and were susceptible to falling over. 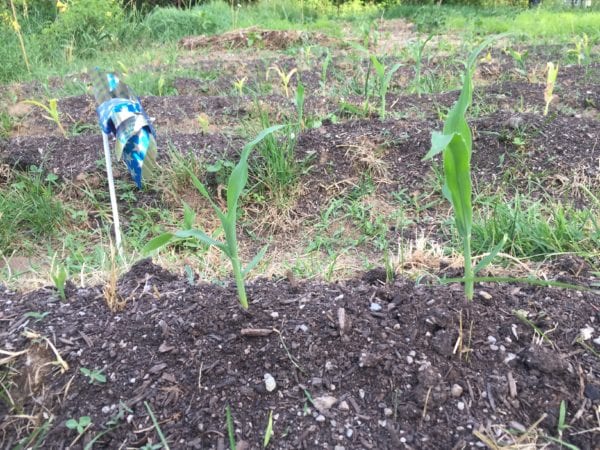 Things started well, but our corn began to lean.

We all lean on Amy, even our corn.

Amy spent countless hours going back and forth on rainy or windy days, setting the corn back upright and patting down the soil around roots. It became a real chore. But her efforts eventually were not required as constantly as in the early few weeks. The stalks took a much better hold of terra firma and and we hoped to finally be on the right road to a bumper crop of sweet corn. Ha, ha. Right.

“Summer breeze, makes me feel fine…” (unless your’re a cornstalk with a bad foundation). 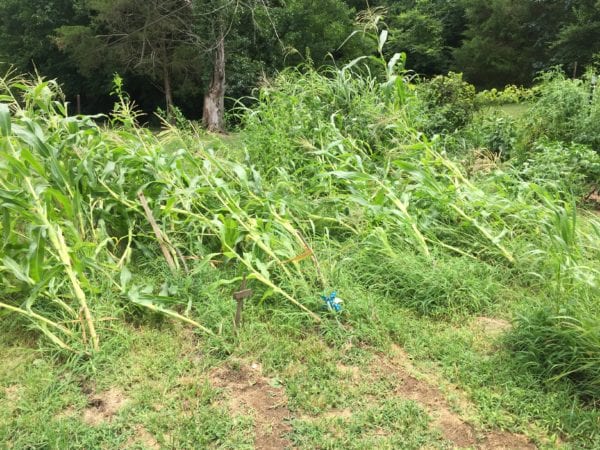 A summer storm pushed over much of our corn crop.

As we neared harvest, summer storms rolled through. They made a mess of our recovering corn crop. At least 1/2, if not ¾, of our crop was now leaning or tipped completely over. We feared that the crop was all but finished and our Homegrown Thanksgiving Menu was going to be corn-less.  Amy had recently begun to repair lattice around our front porch and had piled the damaged pieces with some debris to be burned this fall. Some of the lattice slats were perfect for saving the corn.

Chris went to work on the crop, pounding the thin lattice slats into the ground until they stood like long, tall stakes. He used jute and plastic cord to tie the corn stalks to the stakes and gently put each stalk into place. There were so many ears coming in, and so close to harvesting, that we could almost taste the fresh sweet corn. Still, we knew that if this effort failed, we were most likely done. 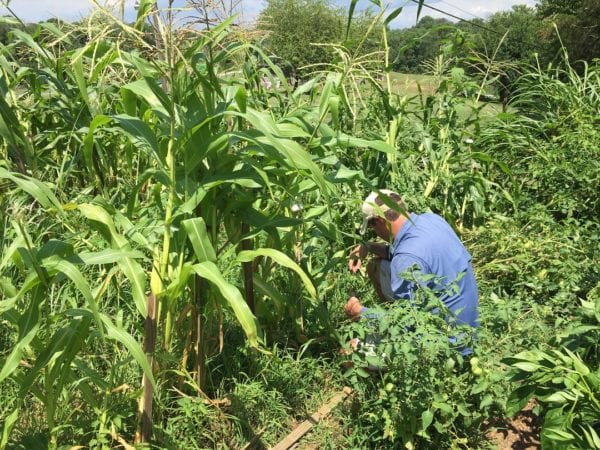 Stakes worked so something else began bugging us.

We only needed the stakes to work for a couple of weeks and they held up just fine. Then we noticed another hurdle… bugs. We had battled Japanese beetles earlier in the season, but now we began to notice tiny beetles hiding in the ears. The corn was so close (or so we thought), to harvest. Was this latest piece of adversity going to ruin everything? We decided not to risk it and began harvesting every ear that was ready or close to ready.

A half bushel of ears that made Evander Holyfield’s look pretty.

Our haul equaled about a half bushel of corn but the haul was not all picture perfect. Some of the ears were missing a ton of kernels. As we shucked the corn it became clear that we only had about 8 ears that looked respectable. Still, the process we were going to use to preserve this crop for our Thanksgiving feast would not require we have “show corn”.

Blanch, not “Blanche” from the Golden Girls. 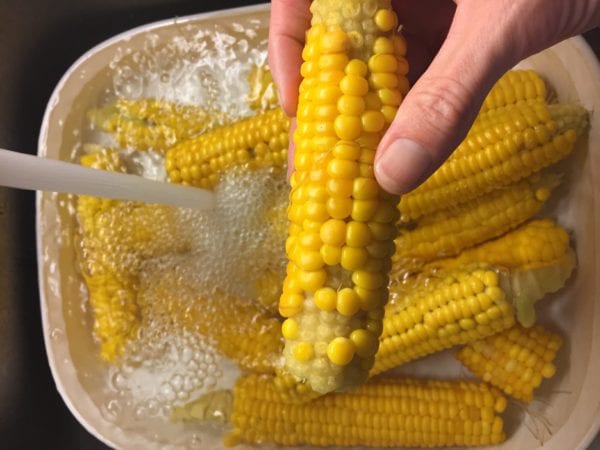 It was an ugly ear of corn but the blanching went well.

Amy decided that it was best to try blanching the corn for cold storage instead of trying to can the corn. We had never canned corn and need a pressure canner, which we don’t have on hand. Freezing after blanching is a great way to keep it for Thanksgiving. She boiled the ears for 6 minutes, then put the ears in cold water for 6 minutes dumping out and replacing the water as needed to keep it cold. Once the corn was cool, she cut the kernels from each ear and placed the kernels in a freezer bag.  Our final take, 6 cups of fresh sweet corn ready for freezing! 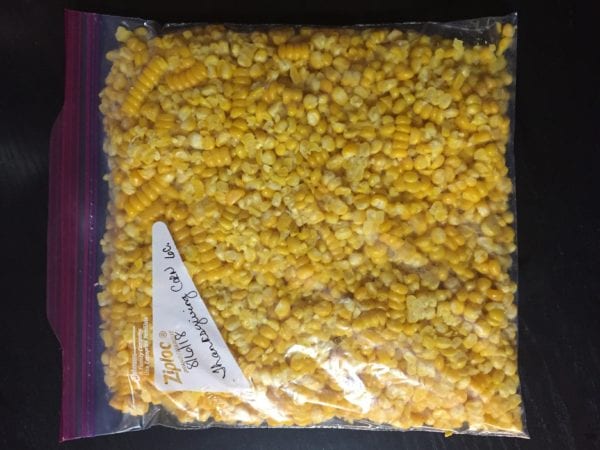 6 cups of corn, blanched, bagged and ready for the freezer.

We still have a handful of ears growing in our crop and will look to harvest them soon enjoying them with a summer meal of burgers or hot dogs (tube steaks). We have a second planting that did nearly nothing but we’re hoping for a second chance. Chris planted 4 rows, 15 feet long about 2 months into our first crop with the hopes that we could get a second harvest of corn. Only 8 of those stalks have sprouted and they are slowly growing. With fingers crossed, we’re hoping that this crop will produce something to at least enjoy the sweet corn late into the summer. Wish us luck.