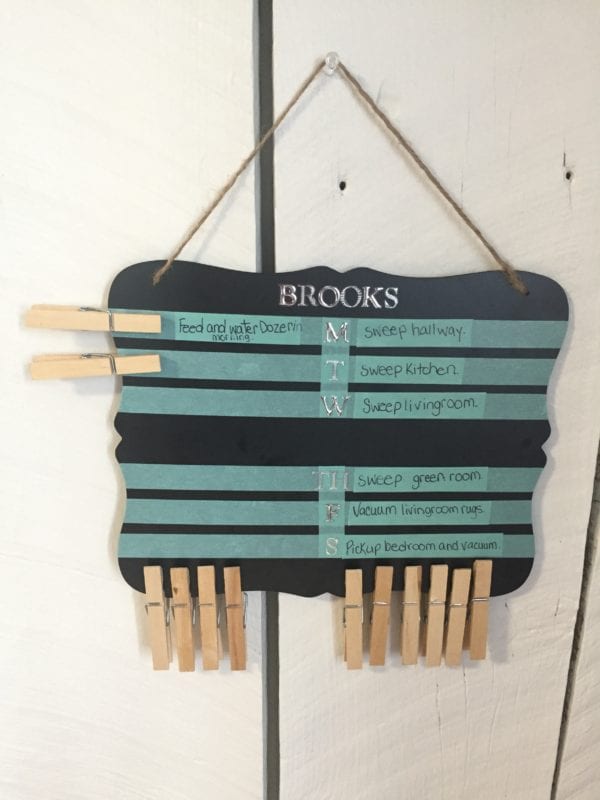 Chore charts are an easy and effective way to keep your children on task.

We want more but do we want another chore.

With the New Year, we’ve started dreaming of adding more to our homestead. We want to grow more food. We’ve been pondering raising other farm animals too. While these thoughts have been exciting, they have me thinking, “How is this going to happen when it was overwhelming at times just doing what we did last year- on top of household priorities? Do I want another chore?”

We are a busy family of six. With school, sports, and things that need to be done around the house and property- trying to juggle everything is difficult. The week is draining and the weekends have felt like a snowball of everything that didn’t get done during the week. Isn’t Sunday supposed to be a day of rest?

I got to thinking pretty deeply about those last two sentences. How in the world is that helping our family? Could our family life run more smoothly? How can we make a consistent change that creates more structure, helpfulness, and rest? I’d tried a plethora of chore charts in the past: complicated daily lists- to make sure everything got done,  organized tasks that just didn’t have much of a reward in it, (Why bother?) and charts that offered an outing or something desired instead of a monetary reward. Those didn’t work either…. If someone was sick, or schedules changed… sometimes the reward got pushed back. There have been seasons in which we just did not have the extra to give.

Here are some thoughts that unraveled while I was thinking over the course of a week. Our family is important. We must “put first things first.” What are the chores that need to be done everyday? Are there a couple of chores that would be nice to have done, that are easy enough for the younger kids to tackle- and it won’t cause me stress? (Like a bucket of soapy water spilling all over and me ultimately having to pull out a mop). What reward is suitable? The older kids are wanting to save for particular things- but are too young to have an outside job. We decided an amount that doesn’t break the bank, yet allows the kids to practice patience and persistence as they save. Each kid is making the same amount per week. Fairness is a big deal to the kids.

Chore Charts 101, back to school for this teacher.

Maybe down the road, the kids would like to switch chores with each other. Maybe another chore could be written instead? A clothespin is removed from the bottom of the board and clipped to each chore completed. It’s a great visual for both the kids and us. I love that there is no erasing (no chalk dust, wet wipes, or rags) or magnets that could get bumped off. For sake of keeping things easy, each chore is rewarded the same amount. If a child does not complete that chore, then they do not earn that amount. If a child is unable to complete that task, another child can substitute and earn that reward.

But where do I start?

In the past, the kids and I have been “gung-ho” about starting a chore chart. Chores are excitedly completed at first but by the end of the week, it’s not so exciting. Our feet are dragging the following week. Most of the chores are SIMPLE enough to do in 5 minutes or less. On Fridays and Saturdays, the chores take a bit longer, but are not so overwhelming that it is going to end up in despair, throwing up hands asking, “Where do I start?” 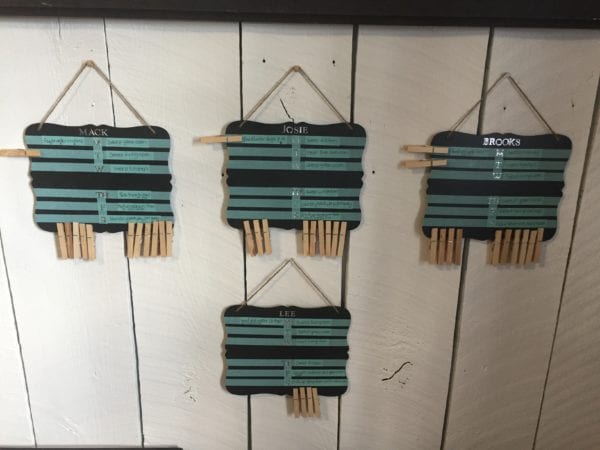 An example of family chore charts for children.

What chores are appropriate? What NEEDS to be done? What can we focus on to gain practice so it is done well? Do not add chores that would in the end stress you out every time a kid does them. For me, that would be dishes- (not that this won’t EVENTUALLY end up on a chore chart). For us, our cupboards are high and there are pieces that are heavy.  Our old farm kitchen doesn’t have the space of modern kitchens. Right now, we have 2 dogs and a family of six. Sweeping is very important to me, so the kids all rotate that job. Every floor is swept daily. There isn’t anyone who “jumps” at the chance to clean the whole bathroom- but what if just the toilet and sink are cleaned? We’ve opted for that to be a chore. An adult helps with the other parts. Often times, rooms aren’t cleaned because we think of the “whole” of the room. (There’s SO much to do)! If we had a portion of the room that is still important, it is more manageable for our kids. Since we are taller, we can pitch in with the tub/shower. If I told any kid to clean an ENTIRE room, they’d feel overwhelmed (include the adults on this one). If I break it into a smaller daily job, it is more manageable and… maybe even fun. On Fridays and Saturdays, the chore takes a little longer. Those are days the big kids do their laundry or pick up and vacuum their floors. For the younger kids, they vacuum rugs and also pick up their room/ playroom and vacuum. I don’t ask for particular organization or making beds- but having the floors picked up is important to me. I’m finding it is A LOT easier to clean myself, because I’m doing the in-between jobs… and when everything adds up, the house is actually getting cleaned on a regular basis.

There has been a more of  relaxed and content state of mind. There has been time to just “sit” and “be” with one another. The gears are moving more smoothly and this will allow for us to think about our homestead adventures and how we want to work together to make it happen. This has all been trial and error and definitely ‘learning by living’ through the years.