Roostavo, Roostavo… you have filled our mornings with the trill of your Rhode Island Red cocka-doodle-do for a month in the back room of our home. You crazy chicken! Amy has turned into a morning ninja, creeping across the kitchen floor in the dark morning hours to start her coffee, hoping not to set off the natural alarm clock capable of waking the whole house. Why have we had such an obnoxious guest in our home? 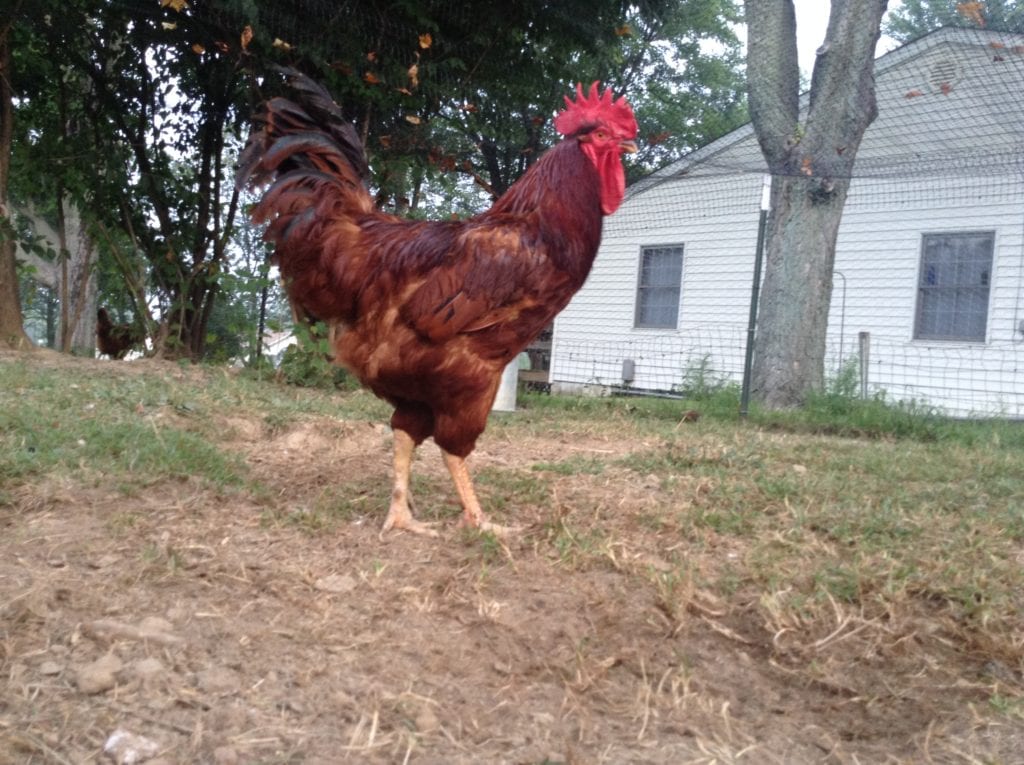 “Roostavo” the rooster before frostbite claimed his middle toe.

We had a frigid winter with many days well below freezing. One day we noticed that one of Roostavo’s toes didn’t look so good. Our strong footed rooster who walked like a dinosaur across his chicken yard, now was favoring one of his feet. Upon closer inspection, it looked like the cold had become too much for it. It was the first serious frostbite our flock had seen.

His middle toe was, in fact, shriveled looking. 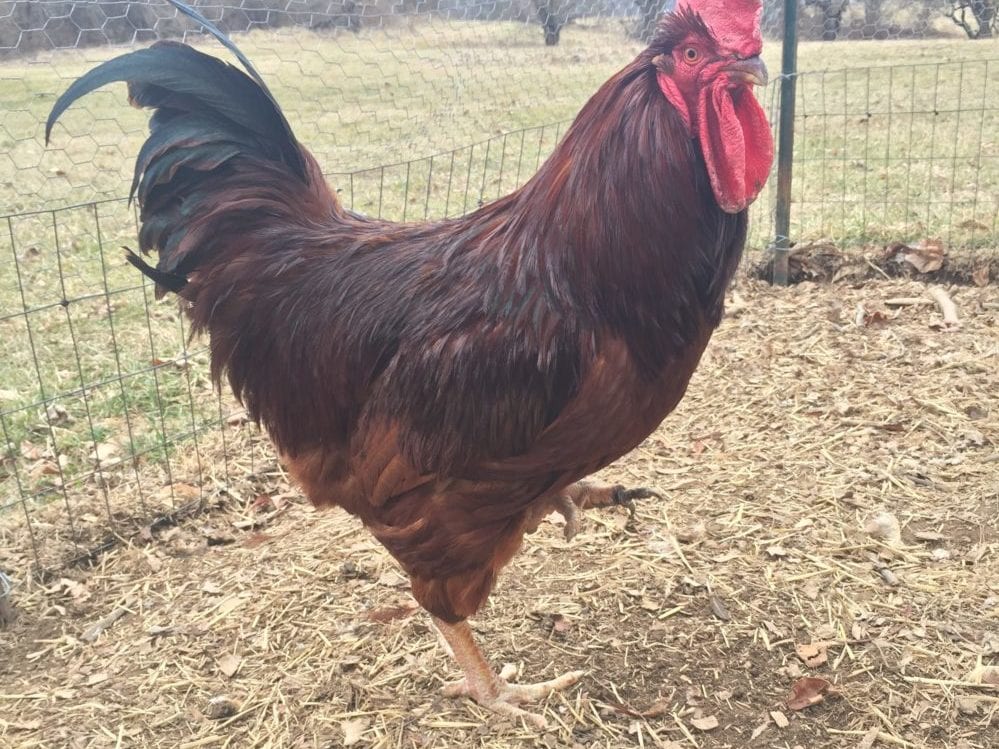 “Roostavo” the rooster with his frostbite bitten middle toe.

I went up to our local farming store and a kind farmer who had heard me discussing my rooster’s dilemma, talked to me about options. He pointed me to a product I could apply to our rooster’s toe & suggested keeping him someplace warmer than the coop and definitely separating him from the flock. If the others chickens see red, the wise old farmer noted, they will peck at the injury.

Since we do not have a garage to house him, and heat lamps in old barns are a little scary to think about with fire danger, the house was really the best (and only) option…. unless you consider the “other” option and we just could not stomach the thought of Roostavo as a five piece meal. The obnoxious house guest does have good qualities that saved him so far from the “other” option.

Roostavo isn’t the kind of aggressive rooster that will charge a person when they enter the chicken yard. He might be on the menu if he attacked any of the kids. While he is a rooster, he hasn’t been overly aggressive with the hens. In fact, we have a hen with a neurological disorder and he seemed to watch over her and not take advantage of her. He did help produce two beautiful looking healthy chicks back in the fall (both of whom became stoic, gorgeous roosters… a story for another day). His genes and disposition have been his saving grace.

He did lose his toe within a few short days of being our house guest. It had turned black then simply fell off. There were a variety of things we did to nurse him back to health. Everyday, or every other day, his crate needed to be cleaned out. It is hard for a wound to heal/seal up if there is excess bacteria around. He had fresh wood chips added each time. It did make a mess. We only added enough so he wouldn’t slip around on the plastic tray under him.

2-3 times a day, we applied a spray called Vetericyn Plus on his healing wound. This is the product the wise old farmer told us we needed. Roostavo even got warm epsom salt foot soaks to clean & help heal his injured foot. At first, it sounded intimidating to soak a rooster’s foot for several minutes but when we figured out that a plastic dish pan could easily fit inside the crate, it made life easier. 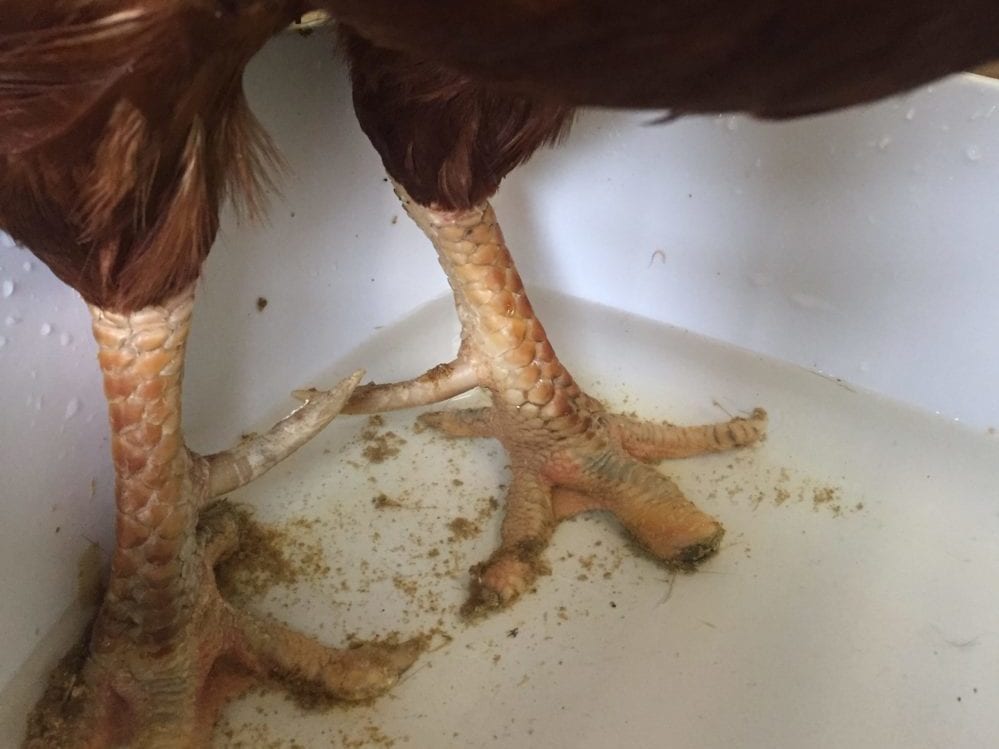 “Roostavo” soaking in an epsom salt bath during recovery from frostbite.

Roostavo would walk into the water as we gently pushed the tub into his crate. We kept an eye on him because drinking salt water isn’t healthy. As his wound healed a little, we took a soft, new toothbrush and wiped away any debris on his healing toe joint. After the pedicure, came clean wood shavings and a fresh spray of the treatment. 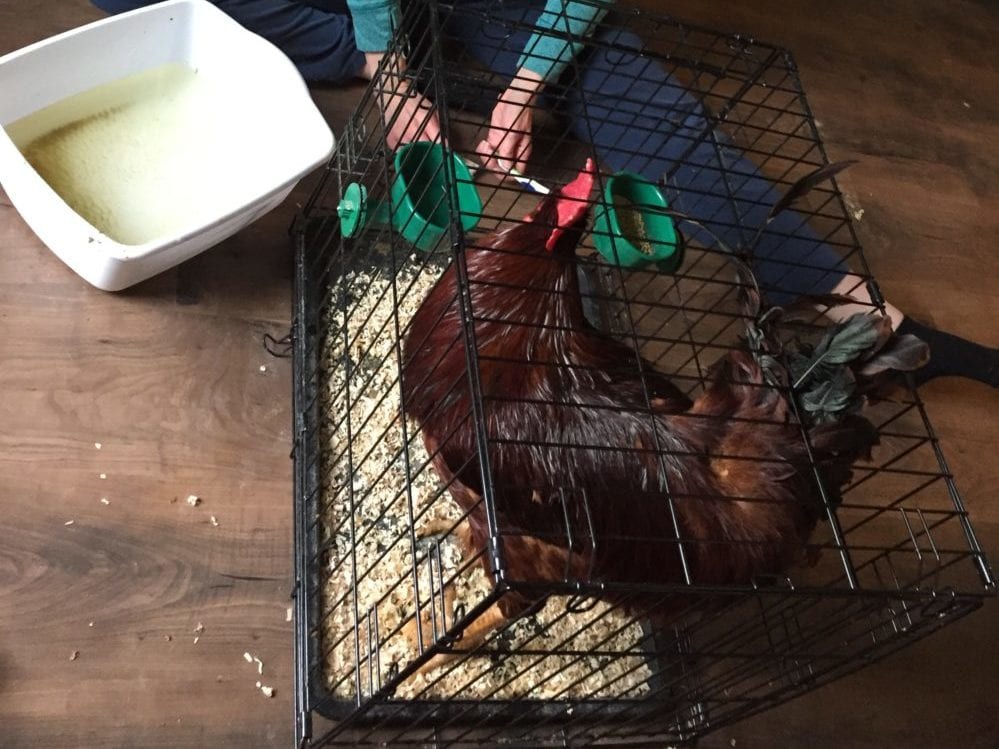 It was a bit intimidating at first, but “Roostavo” was a very good patient even letting Amy clean his wound with a toothbrush.

Roostavo has seemed pretty content as a house guest. He got used to the pampering pretty easily & didn’t mind our hands reaching in to provide food, water, or touch his feet. It has been interesting to have phone conversations with a rooster randomly crowing in the next room, especially during automated voice calls. While it all makes for interesting conversation, we’ve been very anxious to get Roostavo outside again and just be a regular chicken with free-range of the run with his old pals. 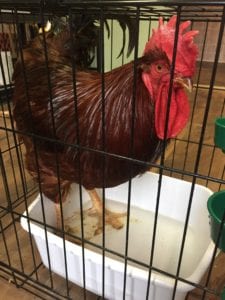 “Roostavo” soaks his foot while recovering from frostbite.

Roostavo is on the mend.

It’s been almost two months, the weather has warmed to above freezing temperatures with more tolerable weather and his foot is nearly completely healed. We’ve moved our obnoxious house guest to a larger outdoor screened-top box that is roomier, gives him fresh air, & an overhang to protect him rain. His toe hasn’t completely healed over, but there has been substantial skin growth working to continue to close the wound. When it has grown over, he will be placed back with his flock.

Would we bring in another chicken from our outside flock again? We will have to see what other solutions we can come up with that keeps the chickens safe & warm outdoors. It feels good to help an animal and nurse them back to health, it feels great to not be forced into ninja-mode just to get a cup of coffee.